Recently, a new strain of ransomware WannaRen came to the surface and began to spread between PCs. This ransomware encrypts files in the Windows system and uses .WannaRen as the extension of encrypted files. The attacker leaves a Bitcoin wallet address and demands 0.05 Bitcoin as ransom. Through tracking and analysis, NSFOCUS’s emergency response team identified “KMS-activation-tool-19.5.2.exe” as the ransomware downloader, which disguises itself as an activation tool for users to download.

How Is the Ransomware Distributed?

Recently, a customer reported infections by a type of ransomware with the name of WannaRen, which was revealed in the ransom note. A sweeping check found that no computer was exposed to the MS17-010 vulnerability. After obtaining more information, we learned that the customer had downloaded a system activation tool KMS. A further investigation revealed that the KMS tool accessed some URLs for the load of other malicious programs.

After anatomizing the tool, we discovered that the KMS-Activation-Tool-19.5.2.exe program was bundled with malicious PowerShell code, as shown in the following figure. 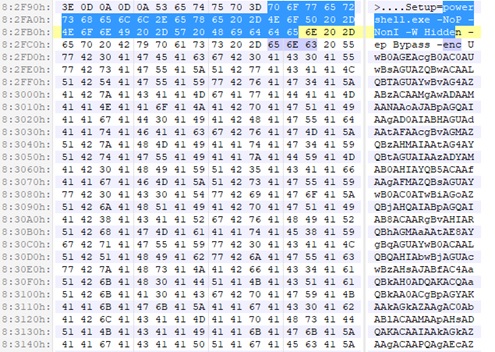 The execution of malicious code has a delay of 2000 seconds (33 minutes). This, to some extent, gives people a false impression that no malicious behavior is ongoing, thus delaying security researchers’ analysis. If the system has antivirus software, such as 360 and QQProtect, in place, the malicious code will not be executed.

The core code is as follows:

The core code’s purpose is to obtain and execute code in hxxp://cs.sslsngyl90.com.

The PowerShell script obtained from this page is for the purpose of downloading the program for local execution.

In the script, WINWORD.EXE has a digital signature, enabling itself to bypass antivirus detection. wwlib.dll uses VMP as the packer, with the same compilation and packing information as WannaRen.

PE information of the @WannaRen@.exe program is as follows:

PE information of wwlib.dll is as follows:

wwlib.dll could not run in the analysis environment, so it is hard to tell whether it conducted encryption. By the time when the article was written (April 4, 17:00), the published security analysis articles concerning this malware believed that this program (wwlib.dll) was the encryption module of WannaRen.

The preceding findings are but a tip of the iceberg. Other code in hxxp://cs.sslsngyl90.com will engage in more types of behavior, including:

However, the virus has its own flaws. Some URLs have been invalid or would return a 404 error, resulting in the script exiting unexpectedly and stopping execution.

On April 8, 2020, code in hxxp://cs.sslsngyl90.com was found to be updated, beginning with the following content:

We can find that WINWORD.EXE and wwlib.dll, which are suspected to be ransomware, are replaced with the code responsible for Monero mining.

The WINWORD.EXE and wwlib.dll programs found this time were closely correlated with a phishing event we handled in June 2019.

The export function of wwlib.dll in the WannaRen event is as follows:

The export function of wwlib.dll found in a phishing event of June 2019 is as follows:

The names of export functions make it clear that the two events are strongly correlated. Both are disguised as the Word program to load the wwlib.dll file. In the phishing event of June 2019, wwlib.dll is a trojan with the callback IP address of 106.12.9.32.

URLs used by the downloader:

Hashes of all modules: