In a recent emergency response activity, NSFOCUS Threat Intelligence center (NTI) discovered a security event that featured NuggetPhantom, a modularized malware toolkit. According to our observation, the organization behind this event made its debut at the end of 2016 in the blue screen of death (BSOD) event that targeted Tianyi Campus clients, and was again involved in another security event that leveraged Tianyi Campus clients to mine cryptocurrency at the end of 2017.

Having captured and analyzed malware carriers frequently used by this organization, we believe that its malware toolkit has been highly modularized and so delivers high flexibility. This toolkit not only features anti-antivirus techniques but also employs many concealment approaches, as demonstrated in its capability of defeating security devices that work based on behavior detection and traffic analysis.

As for target selection, this organization, as a disciple of the principle of “man is the measure of security”, took its first step by identifying less professional users according to the security of their devices. Then it attempted to attack these users by exploiting an N-day vulnerability with EternalBlue. Besides, to better hide itself and evade detection, the organization tried to lower the impact of malware on users at the expense of financial gains.

After finding that the operating system on a user’s computer contains the EternalBlue vulnerability, the attacker exploits this vulnerability to send Eternal_Blue_Payload to the victim computer. Next, this payload drops all modules, which subsequently access the download server to obtain their respective encrypted files and then dynamically decrypt them in memory before executing related malicious functions. Following is a flowchart of the entire attack process. 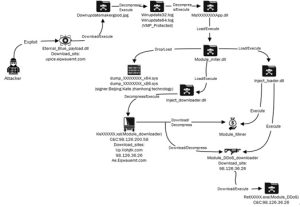 Obviously, this attack procedure is fully consistent with the classic kill chain:

From the preceding analysis, we can draw the following conclusions: