On June 8, 2017, the security company ESET discovered the ICS-targeting malware Win32/Industroyer. Dragos verified analysis results of ESET and released the hash information and analysis report of Win32/Industroyer on June 12. Those behind Industroyer have a deep knowledge and understanding of ICSs, especially industrial control protocols used in electric power systems. Support for four different industrial control protocols, specified in the standards listed below, has been implemented by the malware authors:

Compared with the malware causing power outage in Ukraine in 2015, Industroyer has a more advanced functional structure and can cause the system to crash, making it deny service to legitimate users. Dragos’s analysis and speculation show that Industroyer may be related to Ukraine’s power outage incident that occurred in December 2016. 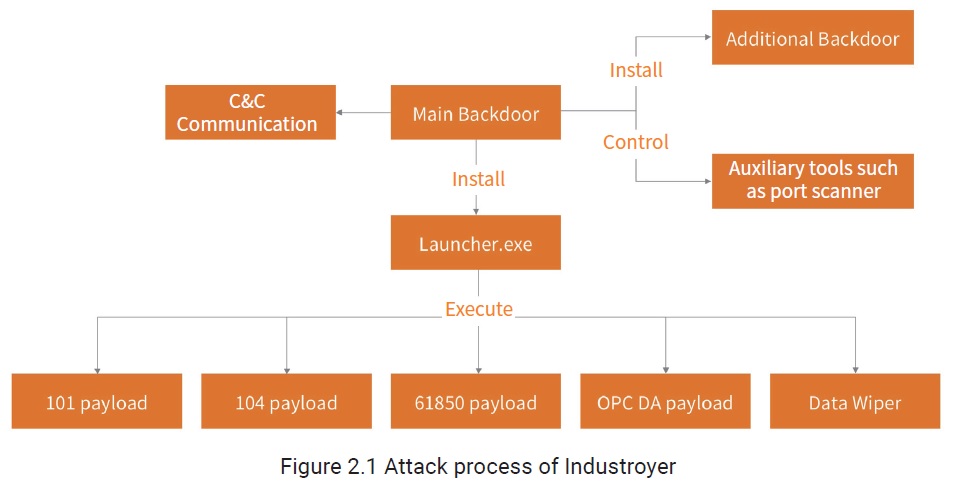 This malware consists of the following modules:

A main backdoor communicates with port 443 on the remote C&C server through port 3128 of the local agent, receiving commands from the server for local execution.

As Industroyer has a port scanner built in, the -ip and -port parameters can be set to an IP address range and a port range for scanning.

The DoS tool exploits the vulnerability (CVE-2015-5374) to target a SIPROTEC device from Siemens by sending a crafted 18-byte UDP packet to port 50000. After the attack is completed, the device stops responding to legitimate instructions until the device is manually rebooted.

Win32/Industroyer is a type of malware designed to target ICSs. It supports four industrial control protocols: IEC101, IEC104, IEC61850, and OPC DA. The sample contains multiple modules, with the main backdoor responsible for installing and running other modules, communicating with the C&C server to receive C&C commands, and performing the next-step operation as instructed. Attacks against industrial control protocols are completed by different payloads, causing the ICS to crash and making it deny service to legitimate users.