Of all attacks targeting web servers in 2018, 89% of them still employed common methods such as server information disclosure, resource leech, SQL injection, and cross-site scripting. 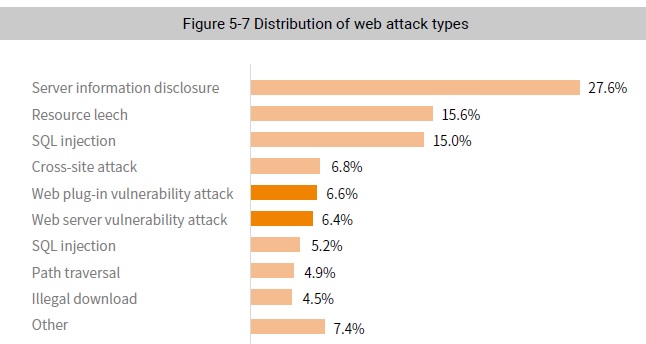 Hackers are using an increasing number of web server or plug-in vulnerabilities. In 2018, vulnerability based web attacks accounted for 11% of all web attacks. It is a bit higher than in 2017 and should be taken seriously regardless of the small percentage. The most targeted web frameworks are Struts 2, Microsoft IIS, and WebLogic. 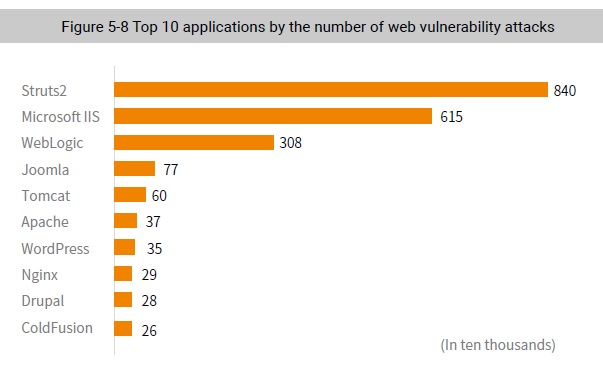 The struts 2 framework is still the favorite target of web attackers. From July 2007 to March 2019, 57 vulnerabilities were disclosed related to Struts 2, including remote code execution vulnerabilities extensively used by hackers because of their ease of exploitation and high level of threat. In 2018, we observed that the following vulnerabilities in Struts 2 were favored by attackers:

From the above, we can see that these vulnerability exploits (except S2-052) against Struts 2 are implemented as follows: Struts 2 executes user-supplied OGNL expressions to cause remote code
execution, command execution, server file operations, and dangerous code execution. The only difference lies in the careful crafting of different OGNL code.

WebLogic related vulnerability exploits mainly take advantage of deserialization. In 2018, more than 80% of attacks against WebLogic were launched through exploitation of the following vulnerability:

Exploitation of Drupal framework vulnerabilities in 2018 is another commom example of web exploitation. In May 2018, NSFOCUS Threat Intelligence (NTI) released a detailed analysis of the propagation and infection trend of the cryptominers taking advantage of a Drupal vulnerability.11