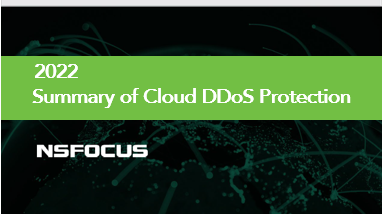 The following service highlights can be found in the report:

The DDoS attack makes online assets, services and applications unavailable for legitimate users by exhausting resources. As DDoS attacks are very easy to create and are constantly evolving, organizations must be prepared with effective countermeasures against sophisticated and volumetric attacks.

NSFOCUS started its own global Cloud DPS service in 2016. For now, it has 7 global Scrubbing Centers carrying Terabit capacity to ensure its customers are protected against even the largest DDoS attacks in history. In addition to the benefit of close-to-source traffic scrubbing, well-selected transit providers combined with Anycast technology ensure all customers could enjoy the consolidated mitigation by all Scrubbing Centers simultaneously, not worrying about traffic congestion in the local Scrubbing Center due to mass DDoS attack volume.