The sample is a Trojan, which belongs to the Tsunami family.

The sample can affect 64-bit Linux platforms (its cross-compiled versions are likely to affect other platforms).

The sample executes commands issued by the remote control end in real time to launch DDoS attacks by exploiting user hosts for a period of time.

This sample can spread by exploiting vulnerabilities such the weak passwords in the server.

Tsunami is a long-standing family and has various spreading methods.

The sample can automatically starts up by writing itself into /etc/rc.d/rc.local or /etc/rc.conf.

The sample randomly generates an IRC nickname which is in the format of <[Tsuyoi]><random string>.

According to the current time, current process ID, and parent process, the sample picks random content from the user dictionary usr/dict/words. The random string is shorter than 9 bytes.

The command in the IRC format is: <prefix><command><parameter1><parameter2>…

The format of the prefix is: <colon><#C2 nickname>. Normally, the C2 nickname is saved for the display of errors. If the received command is found not to contain the nickname in the prefix, the nickname will be displayed as an asterisk (*).

If the format of the command sent by the remote control end is incorrect, the sample will send the correct command format as a reminder, with the C2 nickname shown in the prefix format.

The C2 function is saved as a form in the format of <command category name – functional function>.

The following table lists all commands.

The complete format of command 352 is as follows:

This command is used to launch UDP flood DDoS attacks. Its standard format is as follows:

The complete formats of subcommands are as follows:

This command launches a UDP flood DDoS attack against the target and shows the start information before the attack and completion information after the attack.

This command launches a UDP flood DDoS attack against a random port of the target and echoes the start information before the attack and complete information after the attack.

If <#C2 nickname> is displayed as “Fine”, the sample kills all processes in its group. Otherwise, it returns related information to the remote control end.

The format of the command is: <:C2 nickname> Ping.

This command directs the zombie to return “PONG Ping” to the remote control end as a response to the ping command. 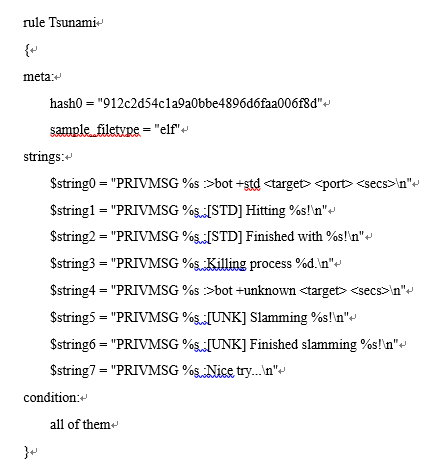