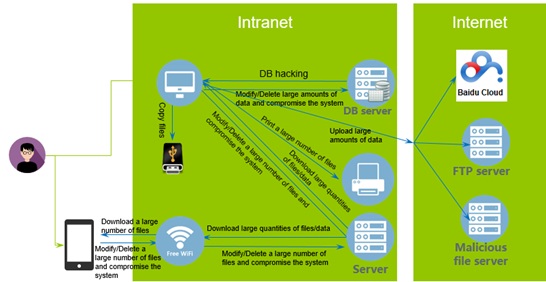 RSA Conference 2019, an annual infosec event that brings all cybersecurity professionals together, kicked off in San Francisco, USA on March 4, 2019. This year’s Conference took “Better” as its theme, which reflected infosec players’ visions to constantly improve their own capabilities and work out better security solutions.

For large security incident databases, he constructed a dimensionality reduction model based on principal component analysis (PCA) clustering to produce security incident datasets and identify latent/dormant threats. As shown in the preceding figure, the implementation is mainly based on PCA and ggplot2 packages in R. Security incidents are subject to dimensionality reduction to form different datasets, or in other words, incidents are clustered according to behavior patterns. Based on these classified datasets, an experienced security analysis expert can perform a correlative analysis of risks or threats and finally discern unknown threats.

This is the new idea of applying machine learning to security analysis. Traditional rule-based security threat analysis is conducted on the basis of a known threat model built on known data. In the face of increasingly complicated and covert attack methods that result in a sharp rise in patterns to be analyzed, this model is limited, especially in “known unknowns” analysis that requires more than just rules. In contrast, machine learning has an obvious advantage in identification of unknown exceptions by building behavior baselines. However, exceptions detected against baselines produced by machine learning using various clustering algorithms or iterative learning of neural networks are Greek to customers. In other words, there is no clear clue for customers to understand what such unknown threats really mean to them. In this sense, machine learning, especially clustering analysis, is also limited. Therefore, it is necessary to combine the traditional rule-based analysis method with the modern machine learning before we see a real transition from the capability of analyzing “known knowns” to that of analyzing “known unknowns”.

The TURING engine to be launched by NSFOCUS is supported by dozens of machine learning algorithms, including fuzzy reasoning, k-core, hierarchical clustering, decision tree learning, density-based spatial clustering of applications with noise (DBSCAN), k-means clustering, collaborative filtering, and isolation forest. Built on an algorithm-enabled framework, the engine leverages adaptive, iterative learning of multi-source data to establish host behavior and user behavior baselines for subsequent detection and analysis of anomalous behavior. The following figure shows the architecture of the solution.

Machine learning is a dynamic process. After the engine has been in use for some time, its centroids may be deviating. In addition, the improper size of data samples and the improperly configured clustering radius parameter or gradient will affect the accuracy of learning results (baselines), leading to overfitting or underfitting training results. For this reason, we provide an interoperability approach to constantly adjust the sensitivity of learning parameters, improve the learning accuracy via trust operations, and iterate deep learning, for the ultimate purpose of presenting behavior baselines that fit in with customers’ actual needs.

The algorithm database of the TURING engine contains three types of algorithms for different usage scenarios:

There is no clear boundary between algorithms and appropriate algorithms should be selected for specific scenarios. Take the identification of abnormal access for example. We use the login behavior as the centroid and extract user names, IP addresses, and time to form different pattern dimensions. Then a DBSCAN algorithm is used to cluster login behavior. For user names that belong to non-numerical and fully discrete patterns, we create a dictionary of user names based on semantic similarities to measure the Euclidean distance. Finally, login behaviors of similar patterns are clustered. The following figure shows the overall implementation process. 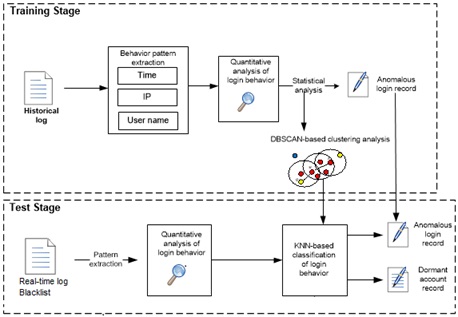 Laboratory tests have proved that the engine does work to our satisfaction. Besides, we used a customer’s real-life environment as a pilot office to test the effectiveness of the engine. Although the number of data samples was limited, the engine still detected such anomalous behavior as brute-force cracking, password leak, and frequent privilege escalation. The customer was also satisfied with the analysis results.

Powered by the preceding capabilities, the TURING engine of NSFOCUS boasts the following advantages:

Usually, when perimeter protections are complete, what worries customers most in security is the failure to effectively detect lateral attacks, data leaks, and data breaches in intranets.

To address this issue, NSFOCUS has developed the TURING engine that can leverage user names, IP addresses/segments, periods of time, file types, file sizes, and file paths obtained from raw historical data to establish file upload, download, and deletion/modification baselines with different machine learning algorithms. Then the engine can detect exceptions against these baselines and generate related information. In cooperation with the correlative analysis framework, the engine can visualize the result, showing whether a user is stealing or breaching data or a host is suffering a data theft or breach.

Anomalous inter-process access in an intranet could lead to lateral attacks, illegal outreach, exfiltration through covert channels, or Bitcoin mining that results in exorbitant CPU usage. This is usually achieved via some illegal backdoor software installed on a compromised host on the intranet.

The TURING engine, based on process running logs provided by servers and hosts, uses machine learning algorithms to establish a baseline of access relationships between a process and other hosts, CPU usage baseline, memory usage baseline, and data usage baseline. When an illegal process is launched for persistent residency and attempts lateral attacks, outreach, exfiltration through covert channels, or cryptomining that results in abnormal CPU usage, it will be on the TURING engine’s radar. 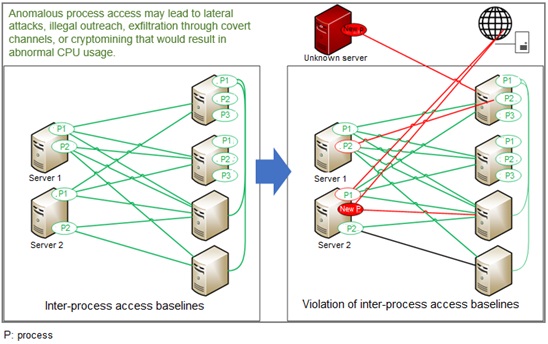 In the past several years that have witnessed the rapid development of the blockchain economy, viruses and trojans targeting cryptocurrency have sprung up like mushrooms. The prevalence of cryptominers leads to exorbitant usage of computing resources, greatly impeding the normal provisioning of services. As it is costly for defenders to counter this type of attacks, which is, however, lucrative for attackers to launch at low costs, cryptomining that hijacks computing resources has steadily risen. The cryptomining kill chain runs as follows: 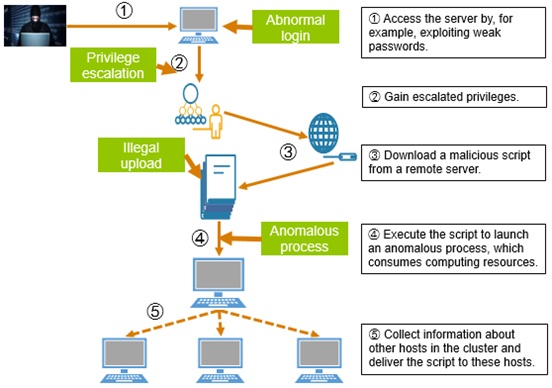 Stuxnet is a malicious computer worm. It is so sophisticated as to be far beyond the capacity of ordinary computer hackers. First uncovered in June 2010, Stuxnet is believed to be a worm specially used for targeted attacks against real-world infrastructure (energy) like nuclear power plants, dams, and state grids.

It exploited four vulnerabilities in Microsoft Windows that had never been discovered before. It uses a USB flash drive of some insider to enter an intranet system, and then uses other exploits to penetrate the private network before infecting other hosts on the intranet. This is what traditional attacks can hardly achieve.

The kill chain of the Stuxnet attack runs as follows: 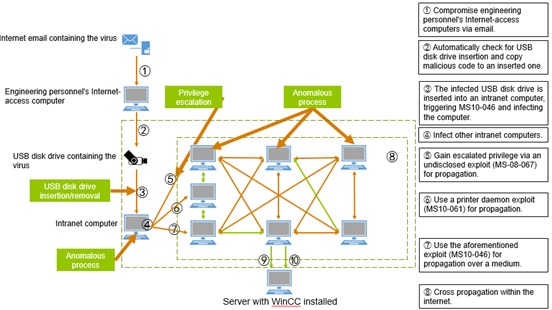 Operation Aurora was a series of organized cyberattacks taking place in mid-December 2009. The initial attack was triggered by a Google employee who clicked a malicious link in an instant message. Subsequently, a series of events ensued, causing the network of the search engine giant to be penetrated for several months. As a result, data of various systems was stolen. This operation targeted Google and twenty-some other companies. It was carefully schemed by an organized criminal group for the purpose of penetrating these enterprises’ networks to steal data.

The TURING engine can capture key anomalous behavior like those found in Operation Aurora, including illegal upload, anomalous process running, anomalous process outreach, and anomalous login, before presenting the entire behavior chain from the perspective of users or hosts to facilitate security analysts’ further analysis and response. 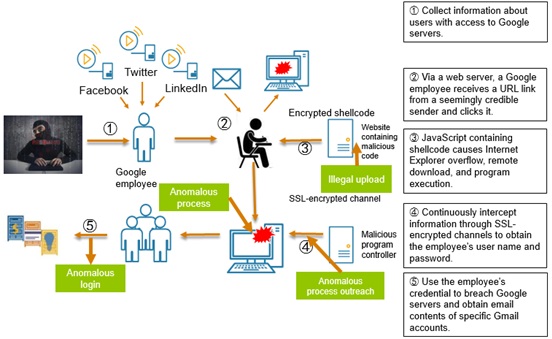