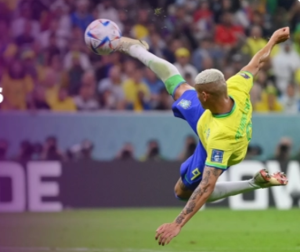 As the 2022 FIFA World Cup kicked off on Sunday, Nov 20, 2022, no country can be more notable than Qatar these days. In this article, we will get you familiar with the host nation Qatar, and show you its infrastructure construction level through analysis of cyberspace services.

Qatar is a small country in Western Asia, with a total area of 11,581 km2. It occupies the small Qatar Peninsula on the northeastern coast of the Arabian Peninsula in the Middle East; it shares its sole land border with Saudi Arabia to the south, with the rest of its territory surrounded by the Persian Gulf. The current population of Qatar is nearly 3 million, the total GDP (PPP) is estimated to be $ 303.596 billion, and per capita is estimated to be $113,675 (2022). Qatar is divided into eight municipalities. Its capital is Doha, home to over 80% of the country’s inhabitants.[1]

It is a high-income economy, backed by the world’s third-largest natural gas and oil reserves. Qatar is one of the world’s largest exporters of liquefied natural gas.

Qatar is hosting the 2022 FIFA World Cup, making it the first Arab country and the first in the Middle East to host the football mega event. It is currently the most expensive World Cup ever held. Since being awarded hosting rights in 2010, Qatar has spent more than $220bn on developing and improving infrastructure and building roads, highways and bridges, making sure Qatar has public transportation and roads for easy access to eight football stadiums in Doha, Wakrah, Education City, Al Khor, Al Rayyan and Lusail City.

The national infrastructure is undoubtedly constructed with the construction of cyberspace at the same time. It can be seen from the mapping data on Shodan [2] that by November 2022, there are 115,079 network services exposed on the Internet in Qatar. From the trend of asset quantity from 2020 to 2022, as shown in Figure 2, we can see that the number of firewalls and cameras deployed in Qatar has grown rapidly from May 2021, until the number of cameras reached the peak in November 2021, while the number of firewalls continues to grow. Such service growth is probably driven by preparation for the 2022 World Cup.

In terms of network service distribution by city, we observe that almost all network services are distributed in Doha (111,437 in total), accounting for 97% of the country, followed by Ar-RayyanLaiyang (2521), and other cities are relatively rare, as shown in Figure 3. This result is closely related to Qatar’s urban construction, population distribution and industrial layout. In addition, it can be seen from the distribution map of the eight stadiums of the Qatar World Cup in Figure 4 that almost all of them are located in the center of Doha and around the city.

Figure 3 Distribution of active network services by city in Qatar

It can be seen from the service type distribution in Figure 5 that the most prominent service type in Qatar is the CDN (Content Delivery Network ) of Akamai (37,838). The CDN is an intelligent virtual network built on the existing network. Relying on edge servers deployed at multiple places, it enables users to obtain the required content at the closest point, reduce network congestion, and improve response speed and hit rate through load balancing, content distribution, scheduling and other functional modules of a central platform. The main functions of deploying CDN are to speed up page loading, reduce bandwidth costs, improve content availability, and improve website security. It is reasonable for Qatar to deploy CDN largely. On the one hand, the mega event 2022 Qatar World Cup would undoubtedly overload the services. On the other hand, it is necessary to ensure the availability and security of services during events. The second largest number of services is cameras (9175). Unlike previous World Cups, the Qatar World Cup has adopted many new Internet of Things (IoT) technologies, such as precise positioning of players and footballs, intelligent wind-solar complementary water-saving irrigation, wearable devices for medical assistance, etc. In addition, Qatar also widely deployed NTPD for clock synchronization service and Plex streaming media service. It is speculated that these services should help audiences worldwide to watch the Qatar World Cup live broadcast on time.

Figure 6 One of the camera scenes in Lusail, Qatar

In this article, we analyzed data obtained by cyberspace surveying and mapping technology to give you know the 2022 World Cup hosting country, Qatar. This kind of data can reflect a city’s infrastructure construction level. Qatar is undoubtedly a microcosm of a city built up rapidly, whether from the infrastructure of geographical space or the network facilities of cyberspace.