Description of Incident Course of Events

Although the vulnerability had been disclosed, the PoC didn’t turn up until two weeks later. Only in several hours after the disclosure of the PoC, attacks exploiting this vulnerability appeared. Then many more attacks against Drupal programs sprang up on the Internet and reached a peak on April 29, and attacks kept going on. 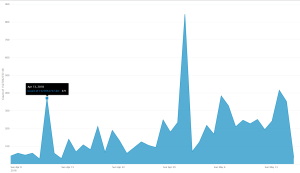 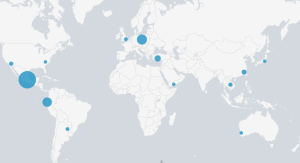 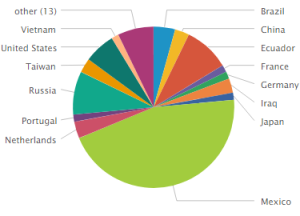 According to the monitoring data, we found that three attack tactics emerged in the Internet soon after the disclosure of the vulnerability.

Mining exploit was the most popular one among the three attack tactics. Since related attack commands and mining pool addresses also appeared in other RCE exploits, it is very likely that groups in black industry chains also paid close attention to these critical vulnerabilities. From the statistics taken to the three categories of attacks, victim hosts implanted mining scripts accounted for 95%, while samples implanted remote control malware and website backdoors accounted for 3% and 1% separately, with defaced webpages on victim websites taking a small portion. 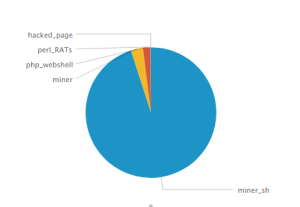 Proportion of Each Category

After the RCE vulnerability was disclosed, groups in black industry chain began to implant mining programs to vulnerable hosts for profiting using the system resources. This kind of attacks often emerges earlier than any other attacks. In addition, black chain groups usually send both Linux- and Windows- based attack payload to different platforms to ensure success of their attacks.

In Windows system, attackers would write a VBScript running in PowerShell and call WScript to download malicious programs, or download directly through PowerShell. Configuration files would be released by running the sample and register would be tampered to protect the malicious program.

Attack payload in Linux system is diversified, disguised as jpg. or pdf. files with hybrid coding, for example. Attackers would match x86 or x64 to download mining programs in victim hosts. They also would write a scheduled task to maintain constancy to help them achieve their ultimate purpose – obtaining digital currencies using the system resources.

Here is an example:

All behaviors of these samples are aimed to obtain Monero. Some wallet addresses were blocked by the Monero organizer in the exploiting process as identified to be relevant to botnets.

During this research period, we found the first botnet exploiting CVE-2018-7600 and making it spread. It was Muhstik. We also captured several active samples. With analysis, NTI figured out the connection between this sample family and the Command & Control (C&C). 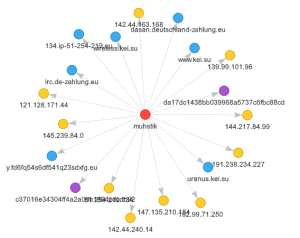 When the vulnerability exploit broke out, we detected a remotely-controlled DDoS script spreading by exploiting the vulnerability. It was based on IRC protocol and written in the Perl language, annotated in Portuguese and Spanish. We analyzed its functions and uncovered one C&C host 104.160.176.178. This script would execute commands, download remote files or launch TCP/UPD Flood according to directions it received. 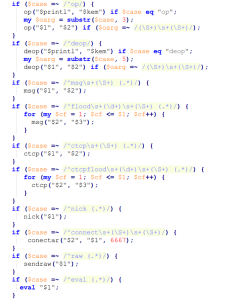 Besides implanting mining and remote-control programs to victim hosts, remote WebShell download and implantation was also a widely used for attackers. It is easier to see from many attacks that more and more attackers were fond of using online file/txt sharing platforms to store WebShell or Bash scripts for hiding real hosts. 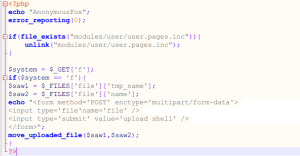 During tracking and observing of Drupal Core RCE vulnerability exploits, we have the following findings: