The Heart of NSFOCUS

The Heart of NSFOCUS 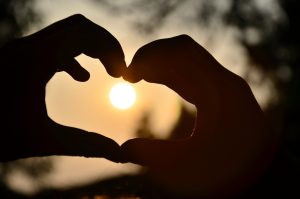 In my last blog, I wrote about traveling to Las Vegas to attend the NSFOCUS International Business Division (IBD), 2016 Sales Kickoff.  The event was a complete success and I had an opportunity to spend four days with some of the smartest and most successful individuals in our industry.   People from all over the world attended, and I have never seen such a mix of nationalities and cultures represented in our meetings and dinners.  During the event, I witnessed the most kindhearted act of my career.

On the third evening of the event, the entire executive management team, the product management team, and the global sales teams attended a “team-building” session.  It was unlike any other session I have participated in my 25 years in our industry, and left me with a lasting impression of The Heart of NSFOCUS.

The 48 of us were randomly divided into six teams. On each table there were two disassembled children’s bicycles  Our job was to assemble the bicycles.   To win the parts needed, each team had to go through a series of contests against the other teams. We were told that the bicycles would be delivered to needy children the next day.

The first contest involved a very large rubber band.  Two members of the team held the rubber band, and each team member had to move their body completely through it without touching it.  Our team won this event in less than 25 seconds.  Once this contest was over, one team representative would move to the front of the room where they retrieved wheels for the disassembled bikes.  We replaced the missing wheels in a matter of minutes.

The following contests consisted of word games, building a tower out of spaghetti with tape, a hula-hoop contest, and building a pyramid out of cups.   After each contest, the teams would send a representative to the front of the room to get the parts needed for the bicycles.  Writing a short rap song about each team’s name and presenting it to the group was the last contest.  We definitely obtained a few picture moments from this!

At this point, the bicycles were fully reassembled and ready to ride.   Then the organizers of the event, (A New Team Adventure) told us that several members of our team were late, so we should open the doors to let them enter.  When we did so, 12 children from local families in need entered the room with their parents – many single moms and dads.    The children and their parents had no idea why they were invited to this event.

Once the children learned that the bicycles were gifts from NSFOCUS and all of us, you should have seen the looks on their faces.  The smiles, the tears, the hugs, and the handshakes were enough to warm even a Scrooge’s heart.   One father told me his son’s bicycle was stolen on Christmas Eve, and another parent told me we renewed his faith in humanity.   After wiping our teary eyes, we all stood for a group picture.  All of the teams were in the back of the photo, while the children with their new bicycles stood in the front. 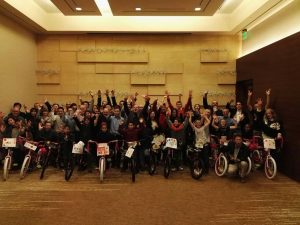 It was single-handedly the most remarkable expression of unconditional giving to those in need.  I had a front row seat to witness it all.  Sharing with those in need is the essence of The Heart of NSFOCUS.