A new type of ransomware was detected on October 24, when it had not been even half a year from the extensive breakout of the notorious ransomware Petya and WannaCry. This ransomware dubbed BadRabbit has been distributed in a number of European countries, including Russia, Ukraine, Bulgaria, Turkey, and Germany, and is now found also in the USA.

Currently, BadRabbit mainly spreads via watering hole websites and does not use the previous EternalBlue vulnerability. Therefore, it is projected that its propagation scale will be smaller than that of Petya and WannaCry. Despite this fact, we should remind our customers to remain vigilant against attacks related to this ransomware.

On October 24, 2017, a new type of ransomware called BadRabbit was found to be widely propagated in East European countries and Russia. Victims are enticed to install a fake flash player program. After this program is installed, the victim’s machine will be infected and files on it will be encrypted. To decrypt these files, the victim has to pay the demanded ransom.

BadRabbit mainly plagues East European countries and Russia, but it also shows its presence in Bulgaria and Turkey.

The sample is delivered via watering hole attacks. When accessing a watering hole website in which the attacker injects malicious code, a legitimate network user is prompted to install the Flash Player plug-in. If the user permits such operation, a fake Flash Player installer will be downloaded from the crafted malicious website (h**p://1dnscontrol[.]com/flash_install[.]php). Once the installer is executed, the user’s machine is infected.

Watering hole is a hacking strategy by which a watering hole is set up on the path that a victim must go through to the destination. The most common practice is as follows: A hacker analyzes the target’s network behavior patterns and finds weaknesses in the website that the target often visits. Then the hacker compromises the website and injects attack code in it, thus completing the process of infecting a website with a trojan. The target will get infected when he or she accesses this website.

The sample uses brute-force methods to enumerate accounts and passwords for use of the SMB service. At the same time, the ransomware is spread by exploiting the EternalRomance (MS17-010) vulnerability.

NSFOCUS Threat Analysis Center (TAC) captured this malicious sample and graded its risk as “high”. The sandbox also detected the entire process from dropping the sample, creating scheduled tasks, and scanning ports 139 and 445 to attempting infection.

According to detection by the sandbox, the executed sample drops and creates a number of malicious files and also creates scheduled tasks in the C disk drive to implement different functions.

According to detection by the sandbox, the executed sample scans ports 139 and 445 for subsequent propagation and infection.

According to detection by the sandbox, the executed sample starts various malicious functional modules by dropping files and creating processes. 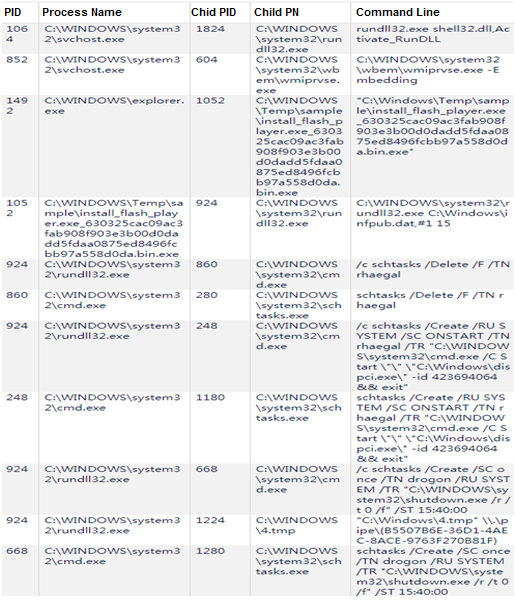 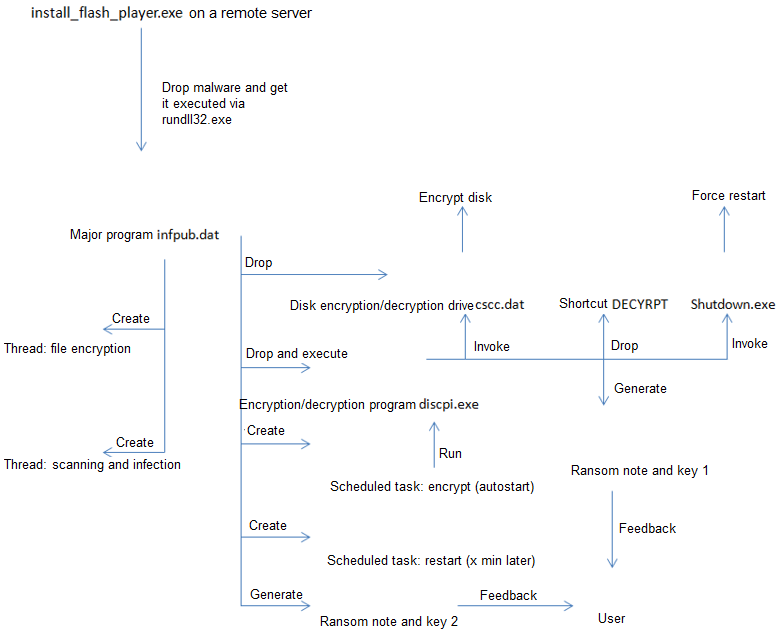 The fake Flash Player installer drops and executes the malware BadRabbit by creating files, writing to these files, and then creating processes pointing to the dropped files. 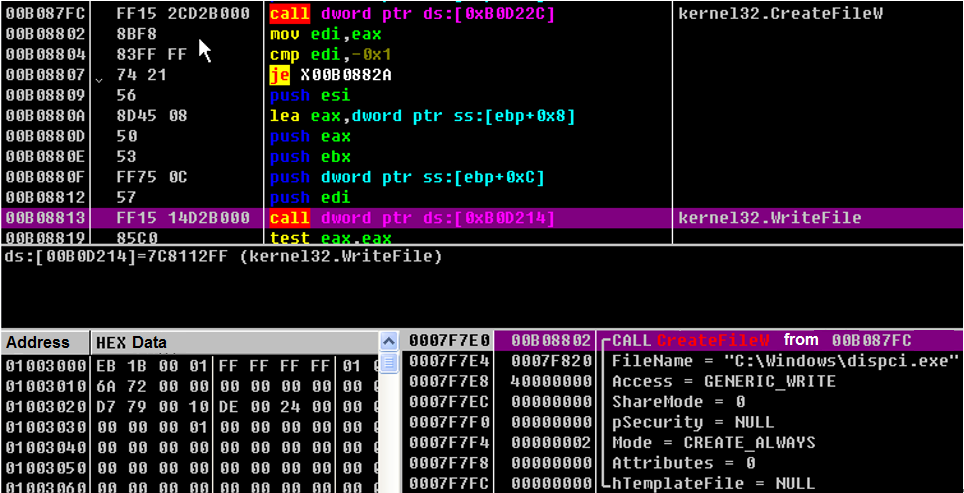 Infpub.dat creates a scheduled task (for starting dispci.exe on boot):

Extensions of files that can be encrypted are listed as follows:

dispci.exe uses the user’s password and public key for decryption operation in the decryption process:

After being executed, the sample drops Infpub.dat, which will attempt to propagate through IPC$ and SMB. 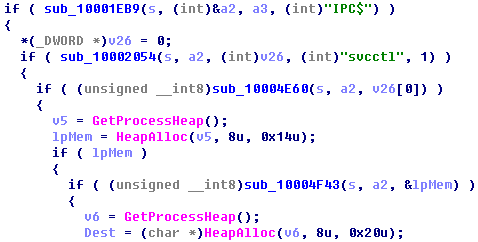 The sample has built-in keys for cracking weak passwords for access to shared folders: 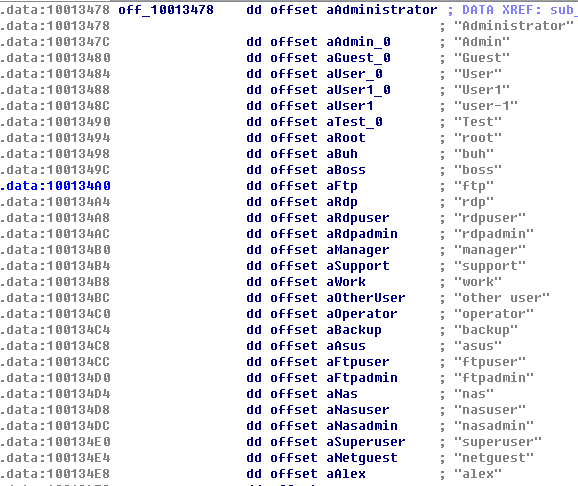 The sample calls the encryption drive to use the AES algorithm for disk encryption. The 32-byte random key is saved in memory. 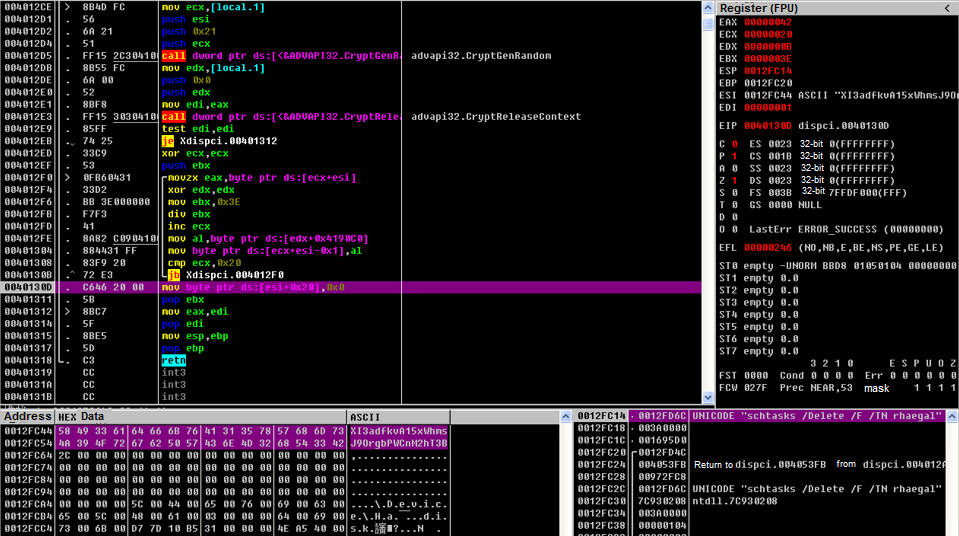 This key, which is randomly generated by the CryptGenRandom function and Base64-encoded, is used for disk encryption and as a power-on password (password#1). The system can be accessed after the selected string is typed. 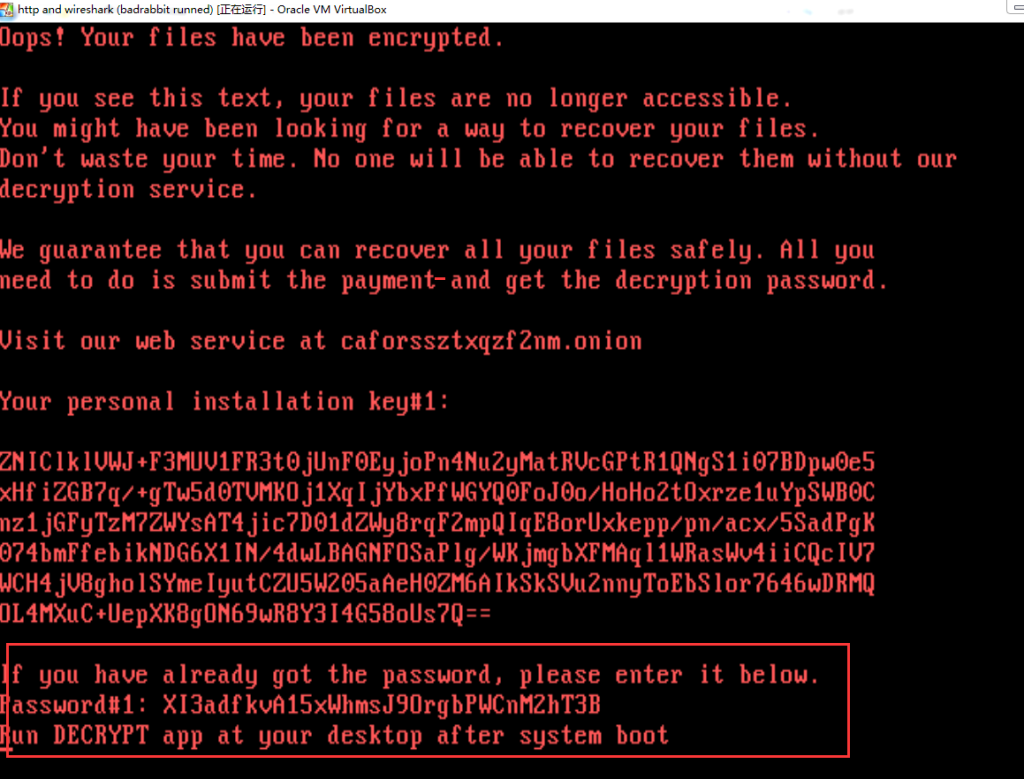 On the system, run dispci.exe (or its shortcut DECYRPT on the desktop) and type the key. Then the disk is decrypted and the boot is restored. 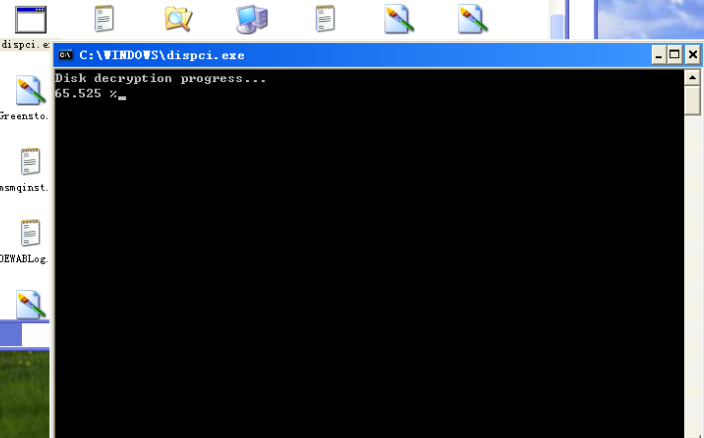 Files are encrypted as follows: 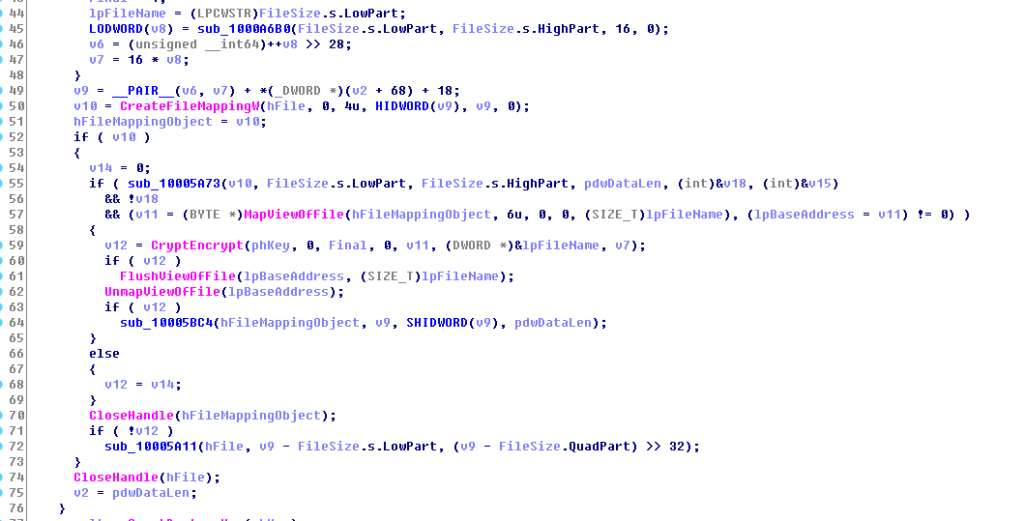 This part is conducted within infpub.dat. The sample randomly generates a 32-byte key to encrypt files with AES. This key is also saved in memory. 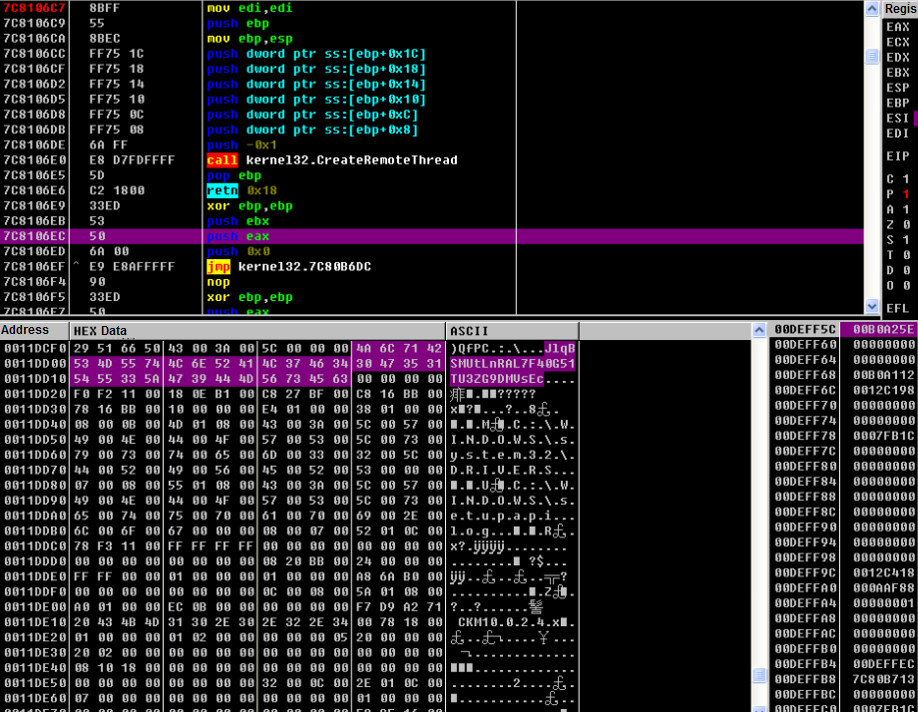 Like what have done before, run dispci.exe and type this binary string at the prompt for password#2. 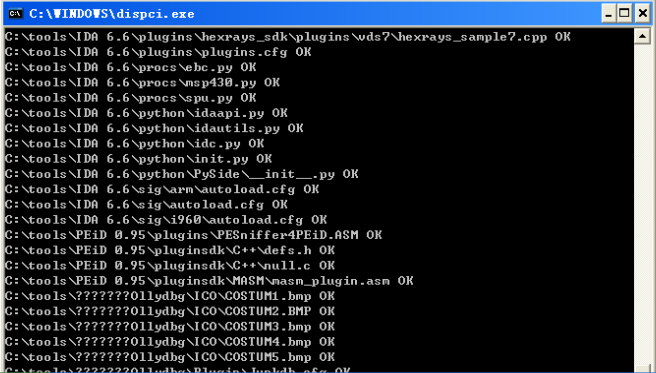 The key generated by the sample will, together with the boot ID, computer name, and work group information, use the built-in RSA2048 key for encryption and Base64 encoding. The structure before encryption is shown in the following figure. The selected binary string is the disk decryption key. 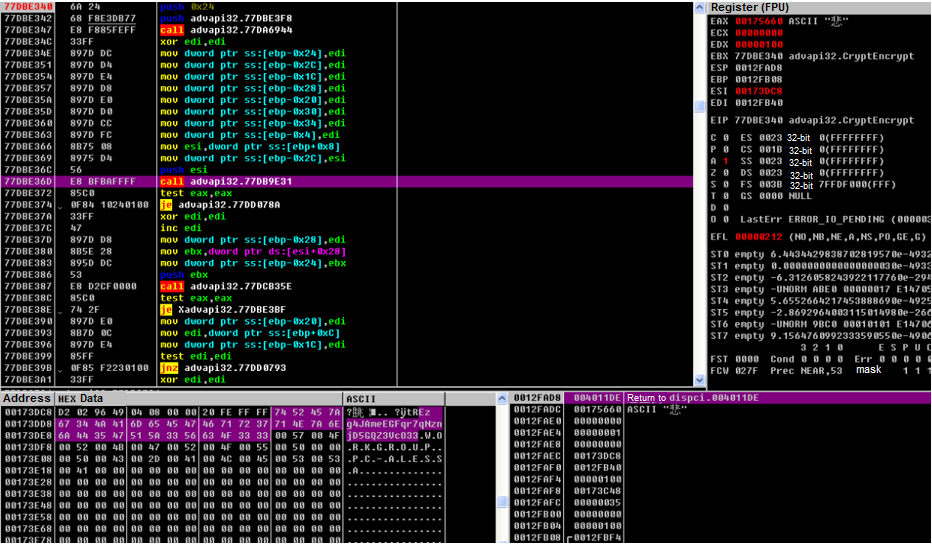 Type the selected binary characters to unlock and access the system. 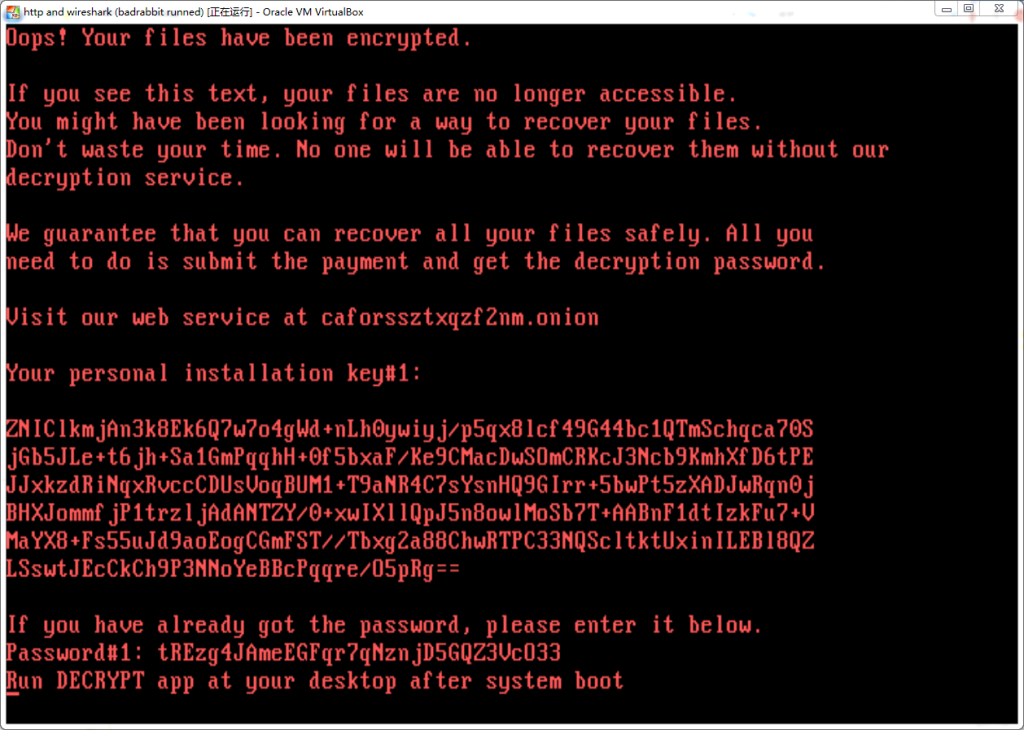 If no key is successfully captured from memory, the victim can only use the attacker-controlled RSA private key to decrypt the installation key before obtaining the correct password.

After the encryption is completed, the following extortion note is displayed: 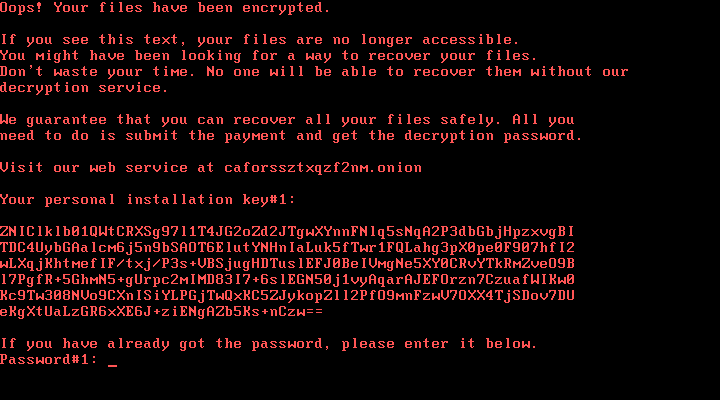 The victim is instructed to access a Tor network address, type the personal installation key, and pay the ransom with bitcoin. 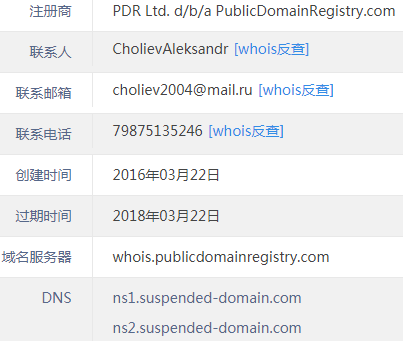 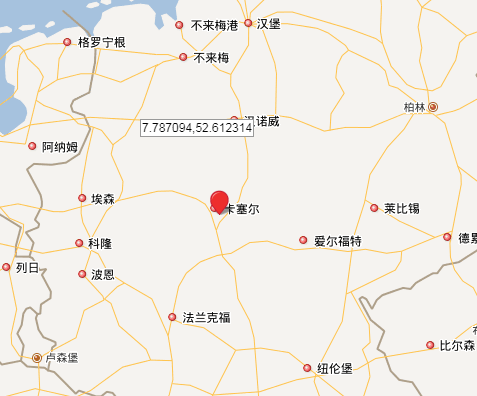 NSFOCUS suggests that a security bulletin be published in either of the following ways (among others) across the company to let the entire staff be aware of the danger of ransomware and follow instructions so as to avoid unnecessary losses arising from negligence:

The following is an example of a security bulletin: 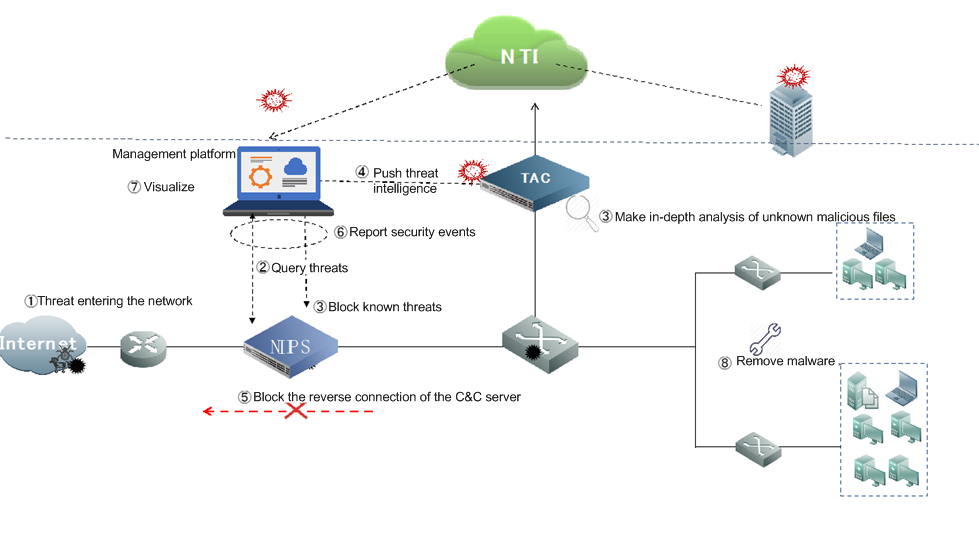