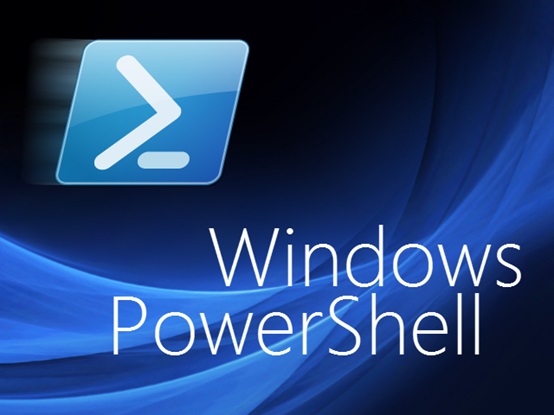 PowerShell has been a focus of concern for network defense. The fileless PowerShell, featuring LotL and excellent ease of use, is widely used in various attack scenarios. In order to capture PowerShell-based attacks, an increasing number of security professionals tend to, through PowerShell event log analysis, extract attack records such as post-exploitation data for enterprise security monitoring, alerting, trackback, and forensics.

Thus, it can be seen that how to evade event logging has become an important phase in network defense. Keeping tabs on continuous improvements in security features in the PowerShell event viewer, attackers employ a variety of techniques and methods to corrupt data concerning the PowerShell logging tool itself and compromise the integrity of event logs. The vulnerability (CVE-2018-8415) patched by Microsoft in October 2018 is another means to evade the logging of the PowerShell event viewer. This document dwells upon security features of the logging function of major versions of PowerShell, as well as attack means, ideas, and techniques against each version of the event viewer.

PowerShell is a powerful scripting language and shell framework mainly available for Windows-based computers, facilitating system management by administrators and likely to replace the default command prompt window on Windows operating systems. The PowerShell script, with good functions, is usually used for normal system management and security configuration. Unfortunately, these features are also understood by attackers who have translated them into attack features (see below), and therefore, they will definitely pose serious threats to enterprise networks.

Since PowerShell was released in 2005, Microsoft has fixed a number of security issues in PowerShell during the 13-year course of fighting between defenders and offenders, making the PowerShell attack environment increasingly difficult to be exploited. One of important security measures Microsoft puts in place is the ScriptBlock logging function of PowerShell, which keeps full records of historical executions of PowerShell. Of course, this function contributes to attack trackback and forensics. However, there is a reciprocal relationship between offenders and defenders, who have been and will continue to be fighting a long battle against each other. The security defense research has been focusing on vulnerabilities in the PowerShell’s logging function and the logging bypass method. In July 2018, a foreign security researcher nicknamed @Malwrologist spotted a flaw in the logging module of PowerShell, which allows attackers to truncate logs with null characters, causing the missing of important logs. Microsoft has fixed this issue (assigned CVE-2018-8415) in its patches released for this month.

Prior to analysis of this vulnerability, we will give a summary of PowerShell’s logging function from the RT&BT angle. Now, we will look back the protection ideas and attack means of various PowerShell versions.

PowerShell V2, as the initial version of this utility released by Microsoft, provides a basic event recording capability to make a brief record of events, but lacks a satisfying logging function. All the same, the default logging level of the old version can also provide sufficient evidence to show the way PowerShell is used. Besides, PowerShell V2 isolates remote handling from local activities and provides contextual information such as the session duration and related user accounts. All of these are sufficient to help members of the Blue Team with deduction and correlative analysis of attack events.

Defense angle (from the perspective of Blue Team)

When any PowerShell commands or scripts are executed, whether locally or remotely, Windows can write events into three log files:

Usually, PowerShell 2.0 can generate event logs indicating when the command or script execution starts or ends, what provider (show the type of function being in use) is loaded, and which user account performs activities, but fail to present detailed historical records of all executed commands or output. Analytic logs contain more information, helping us locate where certain errors occur. However, the analytic logging function, once enabled (disabled by default), will generate a great deal of record data in the production environment, hindering the actual analysis.

To view analytic logs, users can click Show Analytics and Debug Logs in the menu bar of the event viewer and select Enable Log in Microsoft-Windows-WinRM/Analytic or run the wevtutil Set-Log command to enable the logging function:

The following is a summary of important evidence captured by each event log file of PowerShell 2.0.

Each time PowerShell executes a single command, whether it is a local or remote session, the following event logs (identified by event ID, i.e., EID) are generated: 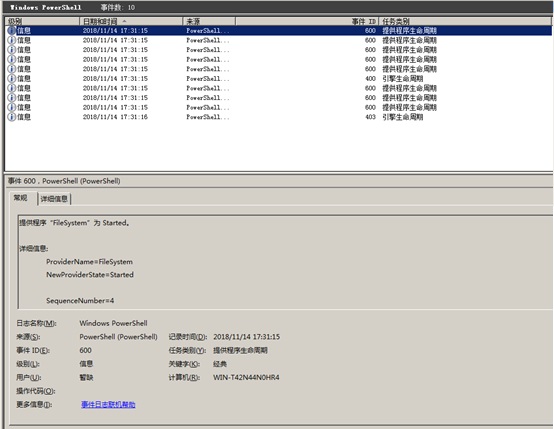 Neither message records the user accounts associated with PowerShell activities. Viewing these events, analysts can determine how long a PowerShell session lasts and whether the session runs locally or remotely.

For PowerShell 2.0, this log file is not found to record any material information.

This log file records the use of WinRM, including remote handling activities by PowerShell.

As mentioned above, events can be captured only when analytic logging is enabled. Capturing such events is intended for troubleshooting rather than long-term security audits. When active, the log file records all security events relating to remote code execution under the following event IDs:

Similar to PowerShell Analytic logging, WinRM Analytic logging is not enabled by default. Once configured, it generates a great number of events which are encoded once again and difficult to analyze.

Attack angle (from the perspective of Red Team):

Due to the incompleteness of logs in earlier versions, various post-exploitation activities concerning PowerShell are nearly traceless. Even in later versions, as PowerShell 2.0 can be enabled on the system, attackers, by taking advantage of forward compatibility, often run the powershell -version 2 command to switch the PowerShell command line to PowerShell 2.0 to evade the logging function. This is analogous to “downgrade attack”. 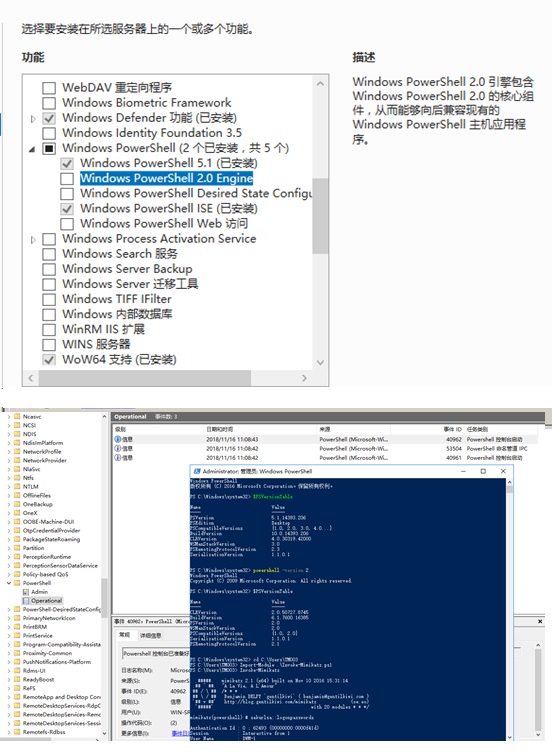 Compared with earlier versions, PowerShell V3/V4 provides a more comprehensive logging function. At this time, attackers turn to obfuscation means to obscure logs so as to escape identification and detection.

Windows PowerShell 3.0 improves the logging and tracing support for commands and modules, with support for Event Tracing in Windows (ETW) logs, an editable LogPipelineExecutionDetails property of modules, and the “Turn on Module Logging” Group Policy setting. PowerShell module logging has been available since PowerShell V3 and will log all events to EID 4103. 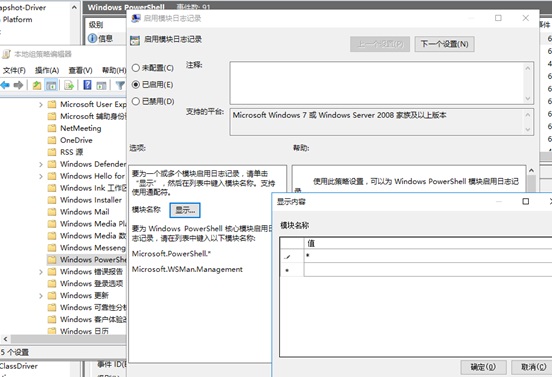 Alternately, setting the following registry values will have the same effect: 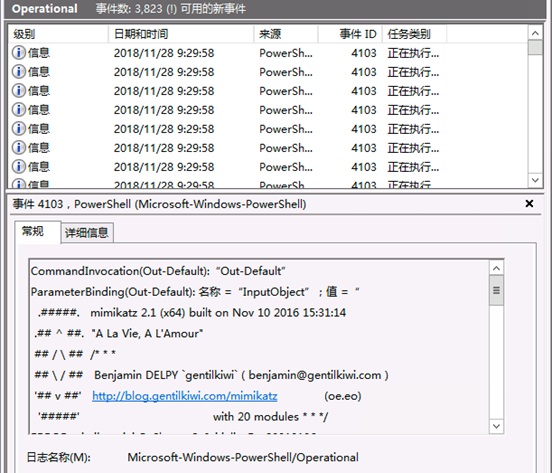 In view of the attack-defense development, after this version is released, attackers also consider other methods to escape the logging function, for example, employing quite a few obfuscation algorithms for obscuring data.

PowerShell V5 adds the CLM and ScriptBlock logging functions, thus capable of deobfuscating PowerShell code and recording event logs to effectively fight against previous attack means. At this time, the attack thinking lays great emphasis on how to downgrade to PowerShell V2.

As the PowerShell attack technology matures, attackers have carried out a lot of code obfuscations to evade protection and logging. However, it is difficult to discover or confirm what these code is executed for, prior to code execution. This makes attack detection and forensics a trickier job. For this reason, Microsoft has added the log dumping and ScriptBlock logging functions to PowerShell V5.0 and later and logs all events to EID 4104. The ScriptBlock logging gives the capability of recording de-obfuscated PowerShell code.

As script code needs to be de-obfuscated prior to execution, the ScriptBlock logging function records the actual code before it is passed to the PowerShell engine for execution. Therefore, many centralized log systems hardly report an alert when capturing suspicious logs. Of course, in my opinion, such alerts are valuable for sample analysis and emergency forensics. 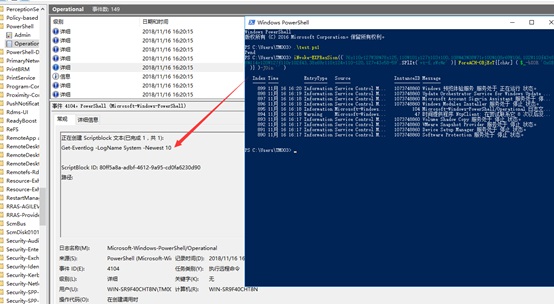 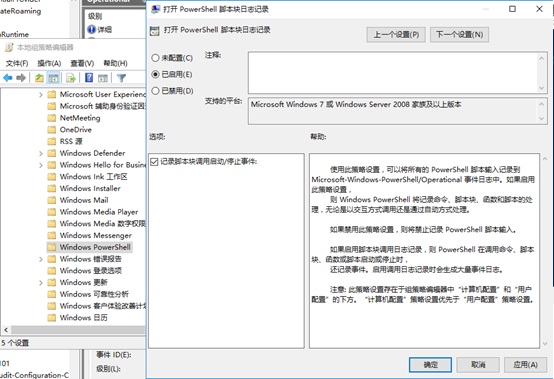 Certainly, users can enable this function by modifying the following registry key:

PowerShell 5.0 supports Windows 7/2008 R2 and later. Though a number of enhanced logging functions in PowerShell 5.0 are reversely ported to PowerShell 4.0, we recommend that PowerSehll 5.0 be installed on each Windows platform.  PowerShell 5.0 provides functions unavailable in V4.0, such as generating logs for suspicious script blocks.

As PowerShell is installed with PWSH on Linux and macOS among other operating systems, logging is an indispensable part, for the sake of security. PowerShell uses the os-log API on a local host to log in to Apple’s uniform logging system. On Linux, PowerShell uses the syslog-based logging function which Microsoft has elevated to a logging solution almost available across the platform. 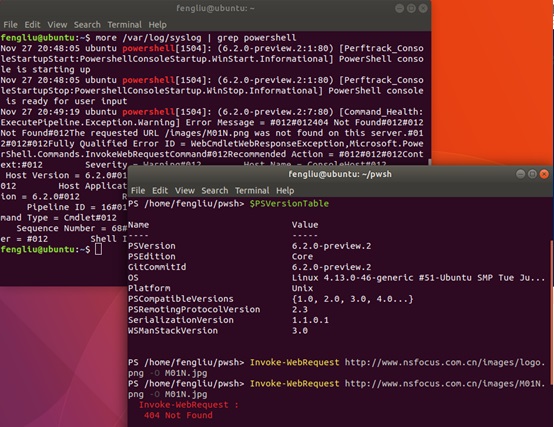 Attack thinking (from the perspective of Red Team): The addition of PowerShell to other systems, though facilitating management by administrators, undoubtedly expands the attack surface of these systems. Besides, the logging function is inadequate in the latest version currently available. During certain relevant tests, I find two points: 1. Logs are generated once a PowerShell execution error is reported. 2. If PowerShell runs properly without an error, only two syslog logs are generated: “PowerShell console is starting up” and “PowerShell console is ready for user input”. For instance, creating a simple reverse shell is another method and this reverse PWSH operation is yet logged. 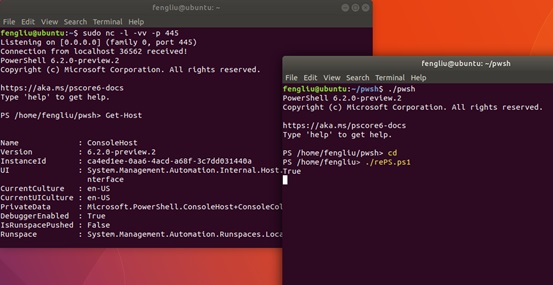 A tampering vulnerability exists in PowerShell that could allow an attacker to execute unlogged code. To exploit this vulnerability, an attacker would need to log on to the affected system and run a specially crafted application. The security update addresses the vulnerability by correcting log management of special characters.

Microsoft describes and rates this vulnerability as “important” (yet to reach the severe level). Taking advantage of this vulnerability, attackers, via crafted code, could bypass the ScriptBlock logging function that is mentioned above. According to the patch indicated on the GitHub website, this vulnerability affects all PowerShell Core versions (including PWSH) and the patch remediation solution only replaces \u0000 with \u2400 in Unicode. From the comments included in the patch shown in the following figure, we can speculate about how the vulnerability works, which, to put it simply, is that truncating logs with null characters leads ScriptBlock logging to stop recording commands.

The vulnerability discoverer nicknamed @Malwrologist revealed this issue on his own Twitter profile as early as July 2018. Following the discoverer’s thinking, we have reproduced this vulnerability and found that because of the null character restriction, this vulnerability can only be triggered during script execution. Due to inner restrictions of the command-line environment, it is impossible to exploit this vulnerability using a single command. Of course, EID 4103 event logs cannot be truncated as intended during the execution of multiple spliced commands, with key-value pairs in the logs still left. 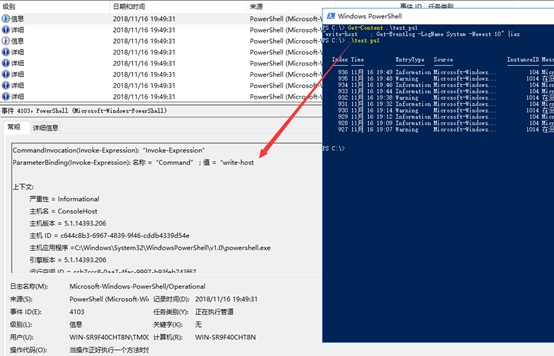 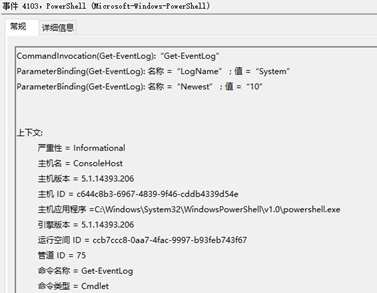 Attack thinking (from the perspective of Red Team): Though key-value pairs are left after exploitation of the vulnerability, attack script code, in actual attack scenarios, features a complicated execution logic for implementing related functions. Moreover, as EID 4103 logs lack the deobfuscation capability, generalizing script functions and attack intentions from a large amount of data incurs a high analysis cost. Clearly, this vulnerability is still very valuable for launching attacks.

As a matter of fact, PowerShell has been widely exploited for carrying out attack activities of varied scales. For instance, it can be seen in downloaders, horizontal scaling of the intranet, privilege maintaining system backdoor, and even attack events initiated by APT organizations such as MuddyWater and FruityArmor. Predictably, PowerShell will still be a hot technology in the coming years. Therefore, as important data support for alert monitoring in this regard, PowerShell event logs must be given to full play. It is recommended that enterprise users keep the PowerShell event viewer updated to the latest version all the time and enable ScriptBlock logging for better defense.