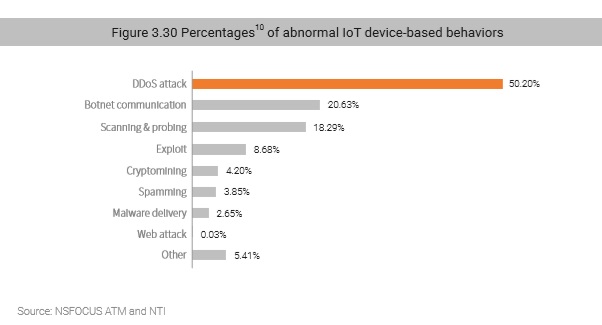 By analyzing the global distribution of IoT devices involved in DDoS attacks, we find that most of these devices are in China, with over 90,000 IP addresses identified. China, Russia, Vietnam, the USA, and Brazil are the top 5 countries housing the most IoT devices. It should be noted that NSFOCUS is aware that an IoT device may change IP addresses over time and are researching mechanisms to better fingerprint IoT devices in the future. 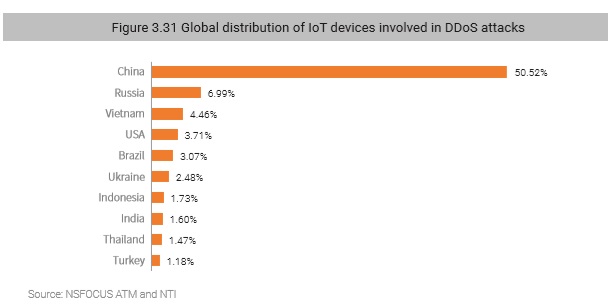 As shown in Figure 3.31, China had the most IP addresses belonging to IoT devices involved in DDoS attacks. If we narrow down the scope to China alone, Jiangsu, Shandong, Guangdong, and Zhejiang were top 4 provinces with the most IoT IP addresses. 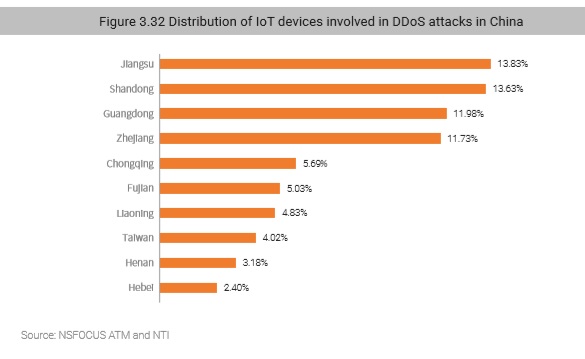 In 2018, Guangdong, Jiangsu, Shandong, and Zhejiang boasted the most provincial Gross Domestic Product (GDP in China). According to NSFOCUS’s 2018 Annual IoT Cybersecurity Report, this has a lot to do with the popularity of IoT devices and the prosperity related to high technologies and services. In particular, economically developed provinces have the financial resources and motivation to procure and deploy IoT devices and related intelligent systems. The output value of the tertiary industry is an important part of their provincial GDP in Guangdong, Jiangsu, Shandong, and Zhejiang. Therefore, it makes sense that IoT device deployment tracks with their level of economic growth.

Routers and cameras are the major targets of IoT device-based attacks. In 2018, many botnets exploited numerous medium & high router and camera vulnerabilities to penetrate these devices. For example, in February 2018, by exploiting CVE-2017-17215 and CVE-2014-8361 vulnerabilities, JenX11  infected Huawei HG532 routers and devices running Realtek SDK to form botnets. It was reported that at least 29,000 devices were controlled by JenX. The new botnet IoTroop12 emerging at the end of 2017 exploited partial Mirai code. Like Mirai, IoTroop targets network devices such as routers and cameras from TP-Link, Avtech, MikroTik, Linksys, Synology, and GoAhead. According to Insikt Group13,  this botnet consists of infected MikroTik routers (80%) and other types of IoT devices (20%), including routers from Ubiquity, Cisco, and ZyXEL.

Regarding device types, the total number of IoT devices involved in DDoS attacks was more than 230,000. As we said, the predominant types were routers and cameras, accounting for more than 94%. This is consistent with the type distribution of IoT devices.